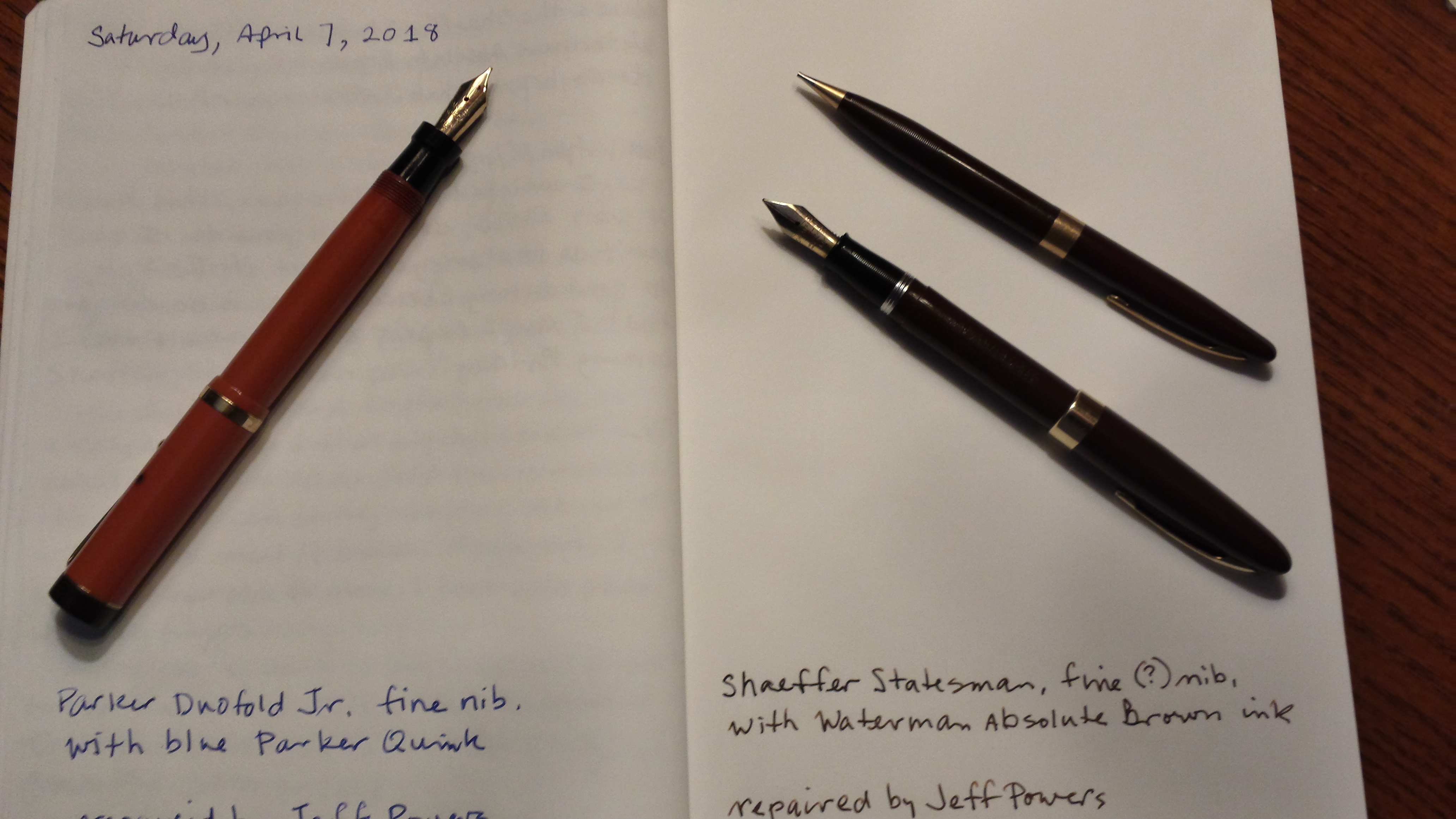 My grandmother on my mother’s side, Florence Smith, lived to the age of 100, and passed away in January, 2010. A few years before that Helen and I were helping my mother get Grandma’s house ready to be put up for sale. It was really a lot of work, since Grandma apparently did not throw out anything. Squirreled away in a desk drawer were a couple of old fountain pens and a mechanical pencil. They no longer worked and Mom said I might as well take them if I wanted. So we brought them home and I squirreled them away in my desk.

A year or so ago I began writing with a couple of modern fountain pens of my own. I began to wonder whether I could get the old pens working again. I did a little research on the pens, and I was able to identify the red pen as a Parker Duofold Jr. pen. With a little more research, based on the markings and trim of the pen I believe I can date the pen to 1926. The brown pen is a Sheaffer, but identifying and dating it was a little more difficult. At first I pegged it as a Sheaffer Balance from the 1940s, but I wasn’t sure.

I quickly determined that repairing them was beyond my ability, so I began to look online for a fountain pen repair specialist. Although there are a number of them to choose from, their work is in high demand, and the wait times can be quite long. I finally contacted Jeff Powers of Powers Pen Company and arranged for him to do the repairs. It was a genuine pleasure working with Jeff, who discussed just what I wanted to have done (full restoration or repair to working condition). He told me what could be accomplished based on their condition. Jeff expressed his appreciation that he was working on what were, for me, heirlooms. We decided that he would repair them to writing condition and do his standard cleaning and polishing. I would have two pens that I could write with, and any remaining cosmetic flaws would be a reminder of the person who originally owned them and wrote with them.

The pens came back to me two days ago, and I am delighted with both pens. I regret the photograph above doesn’t do justice to how nice they turned out. (I’ll try to put up something better). Although Jeff did not do a full cosmetic restore, his clean and polish job improved both pens nicely. And most importantly, they both are wonderful writers, especially the Sheaffer. I Inked up the Parker Duofold Jr. pen with blue Parker Quink, and in the photo above I wrote in my journal with Tomoe River paper (famous among fountain pen aficionados). I filled the Sheaffer with Waterman Absolute Brown ink, and it looks great on the Tomoe River paper.

It was great working with Jeff, and should anyone read this and have a fountain pen they would like to have worked on, I can recommend him without hesitation.